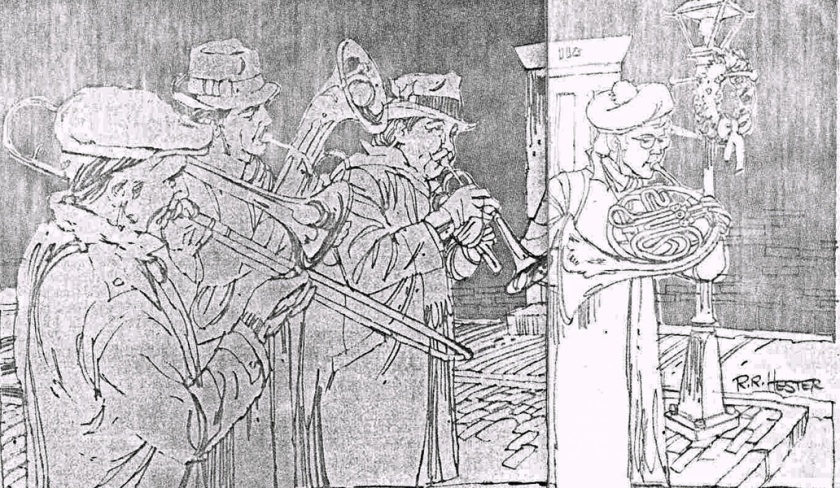 Aldbourne Band were out and about this morning, following their time honoured tradition to herald Christmas Day.  For those of us who partake of social media, it was fun to watch the comments appearing as the group of stalwart players made progress through the streets and of course to hear the soft notes (we’re not near a streetlamp these days) of ‘Silent Night’.

Read the account of a ‘new American friend’ who visited the village in 1985 to explore the custom (with thanks to Graham Smith for the copy of the article).  Brass Caroling with Aldbourne Band – Douglas Smith (pdf opens in new window).  For lots more information, please visit Aldbourne Band – A History by Graham Palmer on the Aldbourne Heritage Centre website – particularly chapter 13, Christians Awake!

Perhaps shy of being in Bethlehem itself the experience of responding to the musical strains of ‘O Come, Let us Adore him, Christ the Lord,’ played beautifully from atop the church tower on that snowy Christmas morning, will linger in my memory as no other. The band did not sing, they did not have to.  Their playing, the dedication which motivated it, said to their American observer everything that needed to be said about the good news of Christmas.

Dr Douglas Smith, professor of church music at the Southern Baptist Theological Seminary in Louisville, writing for the British Notebook in The Church Musician September 1985