VE and VJ Day 75th Anniversary commemorations have been vastly different to those originally envisaged. On 15 August 2020 there will be national events to mark the occasion, including a two-minute silence at 11am. Listen out for St Michael’s Church bells after the silence. Many of us will remember relatives or friends who died; and those who carried, or will carry, the effects of physical and mental suffering for the rest of their lives.

This is a huge and emotive subject to explore, and I hope that anyone reading this who would like to add to the stories told here, will contact me via the comments box at the end of this article. Once again I must say thank you to the folk who have helped me to tell these few stories. One of the trips I was hoping to make this summer was to the National Memorial Arboretum but instead Ive found their VJ Day activity pack, virtual guided walks and on-line exhibition really useful. These resources can be found at http://www.thenma.org.uk/events-at-the-arboretum/vj-day-75/

I’ve taken as my guide some articles from The Dabchick magazine in 1991 and 1995. Firstly, an account by Barbara Sowerby of her experiences as a prisoner of the Japanese – please click on the small image to open the full article.

Broadcast for the 70th anniversary of VJ Day

Thanks to Ian Warrington for posting his family photo on my Aldbourne Archive Facebook page.

VJ Day 1945 – “A very happy day for my Mother. Dad would be coming home after 4 years in India. When Dad was called up it meant that Mum was left alone in London with a new baby (Chris) and she did not see Dad for the 4 years as there was no home leave all the way from India.”

Thanks to Ishbel and Annie for access to Andrew Sewell’s vast and fascinating collection of photos, diary notes and artefacts. In February 1940, and his 19th birthday, Andrew was in Scotland helping the Lanarkshire Yeomany ‘convert from horses to guns’. A year later the regiment travelled to India, which provided all the arms and equipment needed to move to Malaya in the late summer. Andrew was wounded in ‘a typical engagement between a battalion just landed at Singapore, a highly professional Indian Army unit and the Japanese’. In February 1942, Alexandra hospital was over-run by the Japanese, patients were killed and captured – Andrew’s diary is not comfortable reading and I can’t do justice to such a full and informative account here. Shortly after the capitulation by the Emperor, Russian forces entered Mukden. Andrew travelled first to Sian in South China, then to India in a USA bomber. Eventually arriving at Liverpool in early September 1945 in good time for his 25th birthday.

It is my privilege to bring the stories full circle, and return to the exhibition and coffee morning held in August 1995. The photos tell the story, and aren’t we fortunate to have them to help us remember the past.

Covid-19 lockdown rules severely restricted who could be present when Chris was laid to rest in the churchyard of St Michael’s Church, Aldbourne. A memorial service, details of which will be announced in due course, will offer the opportunity to share thoughts and memories of our ‘Local Yokel”.

I was privileged to have many chats with Chris over the years, and he always had a tale to share about Aldbourne history. His contribution to the Aldbourne Oral History project can be heard via Aldbourne Community Heritage Group website http://aldbourneheritage.org.uk/village-history/oral-history

I remember Chris watching as the church clock face was lowered on ropes (June 2006). It WAS too large to pass through the doorway into the tower – he said it would be!

His sketches and poems in the guise of ‘Local Yokel’ are treasures. For many years he created the posters for Carol Singing around the village. Miss Susan Bailey handed me several examples of Chris’ work many years ago. The Harvest Poem dates from 2012 and was part of a display at St Michael’s Church.

I started a Flickr Gallery in 2008. It now has just over 4,000 photos in it. Flickr has been acquired by something called Smug Mug, and I’ve decided not to add any more photos since there seems to be a risk that the Gallery might disappear; free accounts being a bit vulnerable to that, it would seem.

So here’s a link – enjoy! https://www.flickr.com/photos/aldbournevillagegallery/albums

Many aspects of village life are represented; particularly Carnival and the Beating of the Bounds. If there are any photos or albums you’d like to chat about, please drop me a line, aldbourne.archive@gmail.com

During the Festival of Archaeology 2019 it was my privilege to share memories about two of our village #HumansOfArchaeology, Andrew Sewell and Howard Gibbs.  Today seems an appropriate day to recall another gentleman in the village, who many will remember, and whose inexhaustible ingenuity supported many projects:  Marcus Rouse.

In the very earliest days of the ‘Aldbourne Archive’, Marcus was kind enough to offer much advice on photographing objects.  This included our original effort for 3D photography.  The Aldbourne Carnival Crown he made, commissioned by the Cheney family, was our very first project (2005).  Marcus explained the symbols in the metalwork.  Dabchicks, The Square, Bells, and the Cross on the Green, the coloured cord around the base of the metalwork represents the sallies or bell-ropes in the Church Tower.  Hours of fun with a turntable, DIY lighting and a VERY DIY background, and a PowerPoint followed.  I can remember long chats when we bumped into each other around the village, once Marcus was inspired by a project his enthusiasm knew no bounds! Much missed.

Marcus contributed a bell wheel for the exhibition in the Memorial Hall during the 2010 Festival.  He made a wooden cut-out of a bell, to show the relative size of bell and wheel.  He also brought along a bell clapper on wheels; so that small people could safely judge the weight.  As I said, a man of great ingenuity.

One of my prized possessions is an acrylic block shaped like a barn which Marcus presented as a memento of a barn dance celebrating my 40th. The year will remain a mystery!

For the first Aldbourne Festival in 1970, Marcus created a bell foundry on the Green.  There was a photograph of this in a fundraising calendar for 2001 and the Aldbourne Heritage Centre have one of his bells, and a model foundry, on display.  I hope to find time to search through pictures in the Aldbourne Photographic Club collection at the Heritage Centre to find a photo of the man himself.  There’s also a fleeting glimpse of the foundry in the film taken by Moya Dixon during the 1970 Festival

I’m putting together a collection of Dabchicks (if anyone has a spare number 39 – April 1997) that would be fab!  Today is an appropriate day to publish these reminiscences following this article by Marcus that I discovered whilst sorting through the collection. 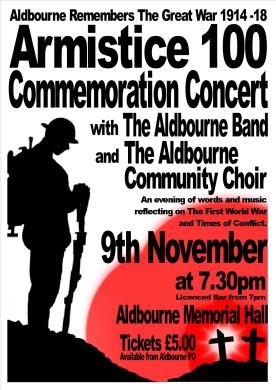 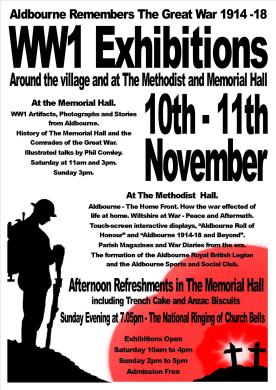 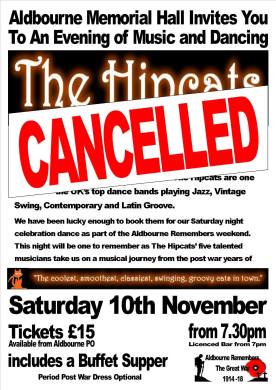 Our village is moving towards a weekend of commemoration and the culmination of months, in some cases years, of hard work by individuals and groups alike.  Stunning displays of poppies have appeared on St Michael’s Church and the Green (thanks to Lorraine Kimber for the photos below).  There will be a concert with Aldbourne Band and the Community Choir on Friday evening 9 November; exhibitions on both days but sadly, due to poor ticket sales, the celebratory dance on Saturday 10 November has been cancelled.

Click on the posters above for a nice clear view of all the information you need!

The United Remembrance Service will take place at the Memorial Hall from 10.45am on Sunday morning, 11 November.  See www.whittonteam.org.uk.  St Michael’s Church bells will ring prior to the service and again at 12.30pm, for the national event Ringing Remembers. There’s one amendment to the poster above: the bells won’t be ringing again on Sunday evening at 7.05pm – if that changes, I’ll update this post.

I’m contributing to the exhibition in the Memorial Hall on Saturday 10 November and Sunday 11 November, joining Phil Comley with his collection of WW1 artefacts, photographs and stories from Aldbourne.  Phil will also be giving illustrated talks during the weekend.  I’ll be bringing along photos from the opening of the Memorial Hall in 1922 and the 90th Anniversary in 2012.  I’m also hoping to bring along some of the information I’ve gathered by using social media  – the Aldbourne Archive on Facebook has produced some surprises over the past few years.  I’ve also had some chance encounters with visitors to the village looking up their relatives; it’s amazing who you bump into whilst walking a dog!

Phil’s talks will be at 11am & 3pm on Saturday 10 November and 3pm on Sunday 11 November.  Afternoon refreshments will be served in the Memorial Hall, including Trench Cake and Anzac Biscuits. (Personally, I’m very much looking forward to sitting down with a cuppa and biscuit – huge heart-felt thank you in advance to the refreshment team!).

The Aldbourne Community Heritage Group have an exhibition in the Methodist Church Hall  with static displays and unveiling their new interactive digital displays which will showcase: The Aldbourne Roll of Honour, Aldbourne in the First World War and After, Stories of Aldbourne Men and their Families.

Aldbourne Memorial Hall Committee have received support from donations from within our community, Aldbourne Parish Council and a grant from the Armed Forces Covenant Fund Trust.  This grant under the Armistice and Armed Forces Communities programme has provided There But Not There silhouettes that will feature as an installation in the Memorial Hall over the weekend. 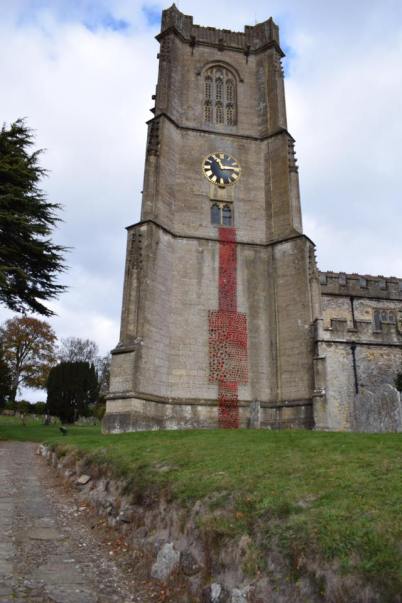 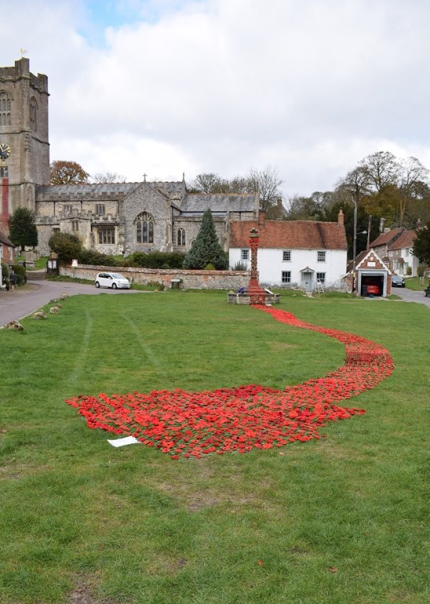 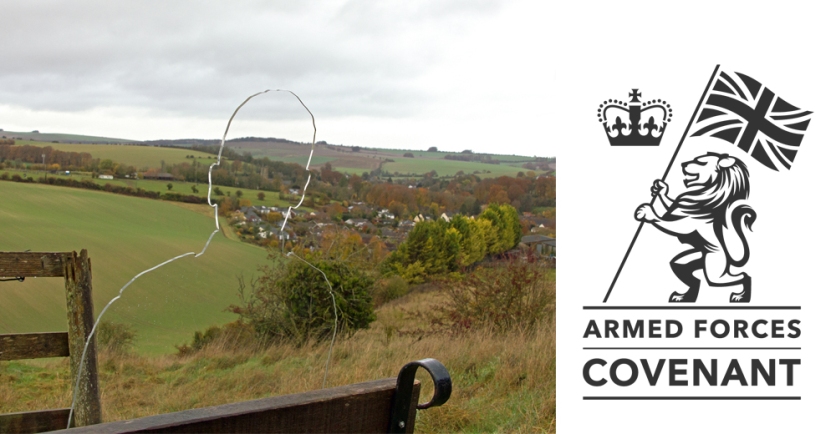 Spotted on a visit to Salisbury Museum last week (we went to see their amazing Terry Pratchett HisWorld exhibition.)  It would be fascinating to delve into the history of this little rumbler bell.  I’d love to know how the Museum know it was made from the old bells at the cathedral.  So much history and so little time … 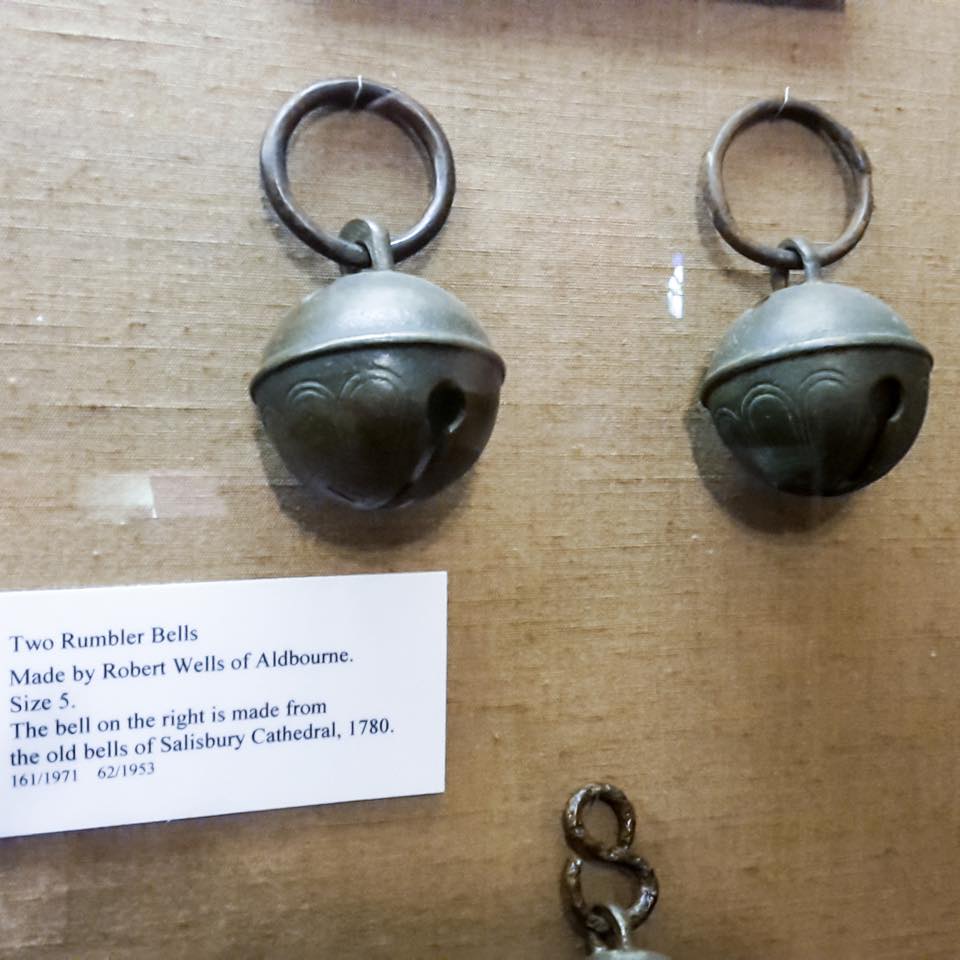 We’ve just returned from a holiday in Dorset, where I discovered the newly refurbished Bridport Museum With a friendly welcome from the volunteers in reception and the opportunity to browse the light, bright and informative displays, it was a lovely way to spend an afternoon.  Spotting two rumbler bells of a very familiar design was a bonus! 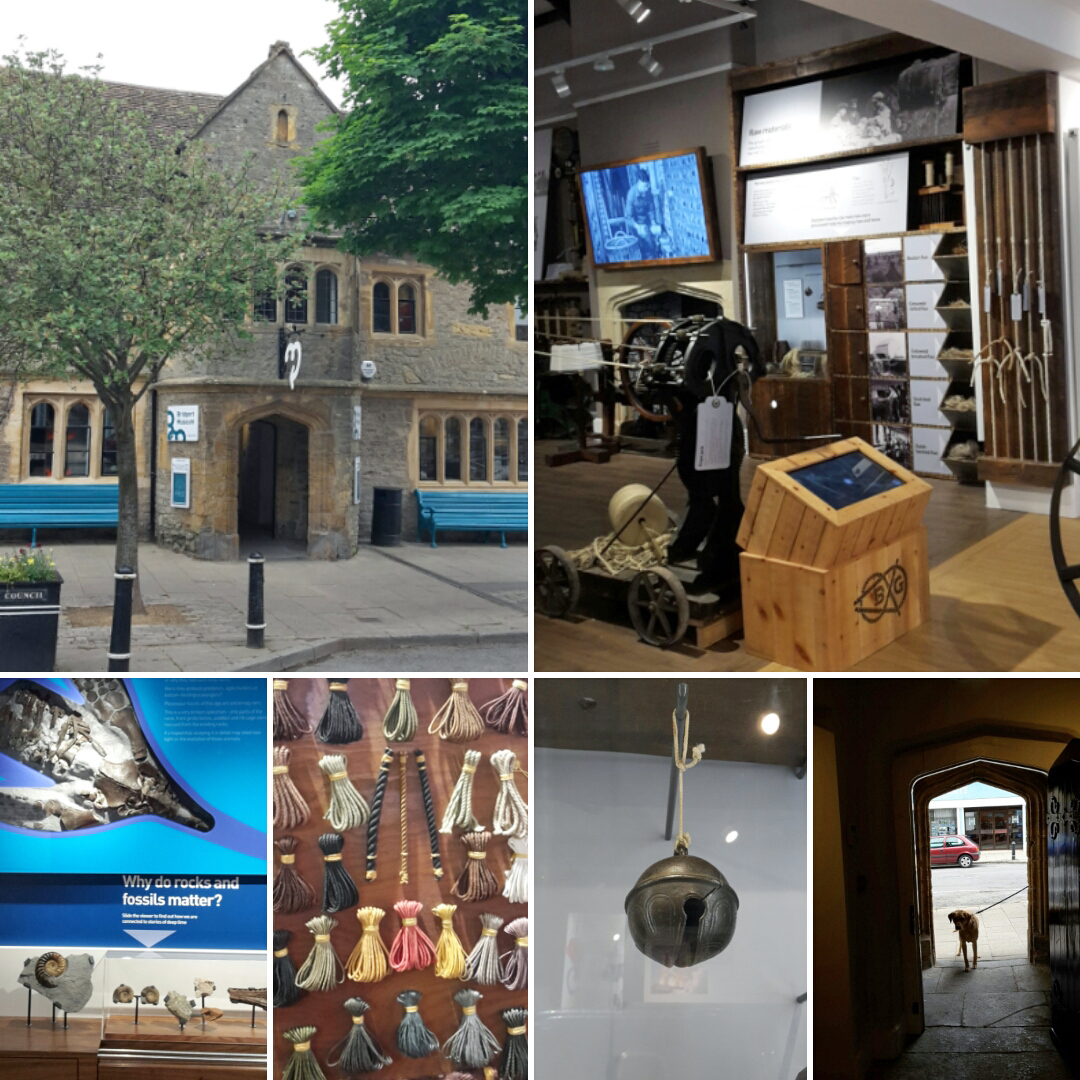